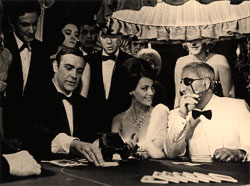 Speaking about baccarat card game, it is impossible to avoid such a phenomenon as baccarat legends: as well as many other casino games, baccarat has its own interesting stories and facts. Being a game of rich history, baccarat introduces many exciting legends about its development. Some of them are given below.

Probably, the most popular one is the legend about baccarat origin: the legend says that we have baccarat today thanks to Etruscan civilization which existed somewhere in 1500 B.C. They had one interesting ritual concerning a priestess's choose: each young lady had to throw a nine-sided dice and her fate was determined in accordance with the number of points she had; if the number of points was lower than 5, she had to jump to a sea and finish her life in such a way. But if she had 8-9 points, she became to be a new priestess; 6-7 points did not make a lady to be a priestess but she had a right to come into a temple at least.

This legend is believed to be a very first origin of baccarat and it is considered to be the oldest baccarat legend ever known.

The legend is that there was some time before when a baccarat player had an option to bet on a "natural" recurrence; actually, this legend had its basics to exist. Anyway, it had not been continuing for a long time because Edward Thorp created such a thing as card counting, which helped players to predict the results of a game somehow and, thus, they did not make a bet on such a repeat of "natural" anymore.

This person was a businessman and a great fan of baccarat game. The legend is that once he made a bet of $1 million on one baccarat game, and thanks to this case he had got a nickname "Mr. Bet-a-Million".

This man is believed to be one of real baccarat experts though probably he was just very lucky. The legend is he won $6 million once after making a bet of $ 200 000; and after some months Akio had lost $10 million at the same casino and baccarat table. This fact makes him to be not only the luckiest baccarat player but also the biggest failure at the same time.

This was the group of five people who were believed to be the biggest baccarat experts of the 20th century. Three Greeks, one American and one Frenchman made everyone trust that baccarat was possible to beat by a team play, but they were just professionals who beat casinos. The legend is that one group's member, Nicolas Zographos, once made a single bet of 1 million francs: his two opponents had 7 and 8 points when two cards of Nicolas showed him zero. He took the third card and... it was 9's of diamonds! Zographos won and considered nine of diamonds to be his personal talisman since then; even his yacht's flag had such a symbol!