Chemin de Fer is One of Modern Baccarat's Ancestors 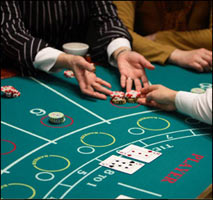 As well as Punto Banco, Chemin de Fer is very popular baccarat variation which is loved in Europe and in France in particular. Moreover, this game is considered to be the original variation of modern baccarat together with one more baccarat game which is Baccarat en Banque.

According to baccarat history, this game came to France from Italy together with Charles VIII's soldiers in the 15th century. But Chemin de Fer in particular became popular and loved at the beginning of the 19th century when it was played in all French casinos. Even today this baccarat variation is played almost in all casinos both in Europe and America because there are so many its admirers all over the world.

The Object and Rules

Actually, the object of all baccarat variations is the same, and Chemin de Fer is not and exception here: to beat one of 2 hands and win money of course. There are only three possible variants to make a bet on: Player, Banker and Tie. The difference between Chemin de Fer and other baccarat variations is the fact that a banker can bet ONLY on Banker, and a player can bet ONLY on Player. But every player who sits at baccarat table has a right to be a banker: a banker is a player who makes the biggest bet and s/he remains a banker till the time s/he loses. After that, the role of a banker goes to the next player.

Chemin de Fer has the same card values as other baccarat variations. It is played with 6 decks of 52 cards, and the values are the following:

The highest number of points in 9 and if a player or a banker has 8-9 points it is called "natural" and considered to be a win at once. As a rule, if a banker or a player has 0-4 points - s/he takes one more card to improve the result; if the sum of points is 6-7 - a banker and a player usually stand; if the number of points is 5 - they make a choice whether to take the third card or not.

When you make a bet at the game of baccarat, it would be rather useful to know what you receive if you win. So: