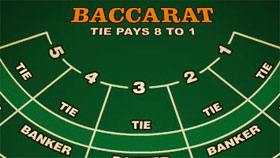 In spite of the fact that baccarat card game is the game of luck, gamblers continue to search for the most effective baccarat betting systems which could be used in order to increase players' chances for winning. One of such systems is Flat Bet Baccarat System which is about the condition of the shoe. Let's give it a try and find out how much such a system work.

Do they really give you an advantage during a baccarat game? Many players tried them and the majority considered such methods to be not effective at all: yes, progressive methods are systematic but it does not mean that they give more winnings. Actually, if you play 9 times using such a method - you will lose 8 times and only 1 game will be successful for you. So, it is easy to count how much you can win by using progressive betting methods; and certainly it is up to a player whether to use such systematic methods or not.

How does it work?

A player pays attention to the current pattern of a shuffled shoe and continues to play according to the cards positions given: if a shoe is not shuffled in such a way all cards are not randomly repeated, it means that the result of a game can be predicted at least somehow. This betting system relies only on a shoe condition; as we know shoes are rather unpredictable and it is impossible to guess the results all the time but anywayâ€¦.