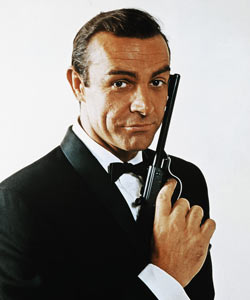 Even if you do not like watching movies you definitely heard about such a film character as James Bond; and we speak about this Agent 007 here because he is considered to be one of the best baccarat players and real fans of baccarat casino game. This fact can be perfectly observed in many films about James Bond though some of them represent him as an admirer of poker.

James Bond is a fictional character which was created by Ian Fleming: Bond is a hero of Fleming's 12 books about a secret agent of British Navy, where James has a status of a commander. Ian Fleming created James Bond in 1953 and since then many actors struggled for the right to play the role of James Bond 007 (007 was the code number of the agent) in screen versions of Fleming's books.

The residence of James Bond is in London, UK; he is a heavy smoker whose favorite beverage is vodka martini; when Bond does not work, he spends time at the apartment in Chelsea.

Many popular Hollywood actors played the role of Agent 007: Timothy Dalton, George Lazenby, Pierce Brosnan, Roger Moore, Daniel Craig; but the most famous and loved "James Bond" was the one played by Sean Connery.

Being a real gentleman, James Bond likes playing cards; and it is not surprising that baccarat was chosen to be his favorite card game thanks to its reputation of a really noble game for aristocrats only. As far as we understand, the environment of Agent 007 consists of rich and aristocratic people, so, baccarat was perfect to play the role of Bond's favorite casino game.

James Bond likes playing Chemin de Fer, the French variant of baccarat which is considered to be the original one of the baccarat family; it can be easily seen in some movies about Agent 007, for example Casino Royale (1967). As for the latest version of Casino Royale, where Daniel Craig played the role of James Bond, Agent 007 did not gamble baccarat but poker there: probably, directors decided to do such a step because of Texas Hold'em's popularity at that time.

Well, even if you are not a secret agent and you do not look like James Bond, it does not mean that you can not go to a casino to play baccarat card game: the myth concerning the fact baccarat is played by rich aristocrats only does not work anymore. So, good luck and enjoy the game!