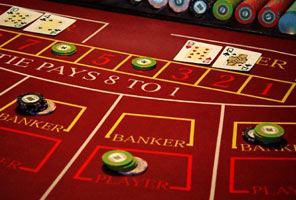 Punto Banco is one of three main baccarat variations and it is also known as being North-American Baccarat, or just American baccarat, because of its popularity and appearance in this region. If to translate the name of Punto Banco in English, we'll have Player vs. Banker that is actually the main concept of the game. Kerry Packer, the Australian tycoon, is a great fan of this baccarat variation.

This variation of baccarat appeared in 1950's when Tommy Renzoni brought baccarat to Las Vegas from Cuba; that is why the original name of this baccarat variation - Punto Banco - has a place to be. The object and rules of the game stayed the same, and in such a way this game variation became to be American baccarat and was quickly widespread and loved by all American gamblers.

The object of Punto Banco is to bet one of only two hands - Player or Banker - by having more points, the biggest number of which is 9. A gambler can make a bet on Player, Banker or both Player and Banker (which is called Tie).

Punto Banco is played at a special baccarat table which usually stays in a separate casino room behind purple curtains: maximum 14 players can take part in a game and 3 dealers help to control the game. Actually, each gambler can play the role of a dealer and be both a Player and a Banker: Punto Banco permits every player be a banker one by one during a game.

Punto Banco is played with six or eight decks of 52 cards and their values are determined to be the following:

So, the maximum you can get at baccarat table is 9 points; and even if the sum of your points exceeds 9, they will be recounted in a right way. For example:

Two cards are dealt faced down to a player and a banker, and then results are counted, depending on which a winner is determined. If a player or a banker has 8 or 9 points (which are called to be "natural") then no more cards are dealt and a winner is automatically known. If no, the following steps can be done:

By a banker (if a player takes the third card):

a banker has 7 stands