History of the Game From Early Till Modern Ages 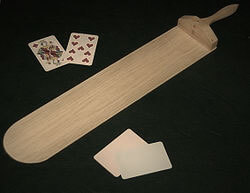 Have you ever heard of the Etruscan civilization? If not, it is a high time to get acquainted with some of their traditions because it was one of them which is believed to give birth to the card game of baccarat, and many researches believed that baccarat history started there.

So, Etruscan civilization existed in 1500 B.C. and followed many different (sometimes even crazy) rituals. One of those rituals was about a priestess's election: young ladies had to throw a nine-sided dice in order to determine how many points each of them had. If a result was 8 or 9, this lady had a right to become a priestess; if she had 6-7 points, she was not a priestess but had a right to come into a temple; but if the sum of points was lower than 5, such a lady had to jump into water from a mountain and finish her life in such an awful way.

This ritual is considered to be a predecessor of baccarat casino game.

Though the word "baccarat" is a French one and France was the country where original baccarat variations (Chemin de Fer and Baccarat en Banque had been developed, the origin of this name was in Italy (the word "baccara" that means "zero"). The father of baccarat is considered to be one Italian gambler Felix Falguerein, who created baccarat concept and baccarat rules.

As for France, baccarat came there together with French soldiers of Charles VIII in the 15th century (the period of the war between France and Italy). It became popular at once among the aristocratic world and this fact gave birth to one of the most popular baccarat myths concerning the fact that this game was played only by noble gentlemen.

In fact, baccarat game was played not only at royal court but also in many illegal clubs. Such a situation took place till the beginning of the 20th century when baccarat came to America and Punto Banco was born.

Actually, one more opinion concerning baccarat's appearance existed: there was a thought that baccarat originated from the card game of blackjack; probably, the structure of the game and some likenesses gave people a cause to think that but this fact was not true: blackjack and baccarat are two completely different card games with different concepts.

Even when baccarat came to America in 1910s and made its debut in one illegal casino of New York, it did not find any popularity thanks to blackjack mentioned above. The American rebirth of baccarat began in 1950s in Nevada thanks to one man who brought it from Cuba where baccarat was called to be Punto Banco. This man was Tommy Renzoni, a famous baccarat author; the rules of Punto Banco remained the same with those ones Tommy brought from Cuba, so that is why Punto Banco is considered to be American baccarat today.

Americans liked baccarat very much and that fact became a reason of some new baccarat variants' birth, for example, Mini-Baccarat; but anyway, two original baccarat variants did not give up! So, many modern casinos propose all three main baccarat games for their visitors: the rules differ a bit but not much, so, it's not difficult for players to choose any of them.

Moreover, baccarat is very popular online today; more and more people prefer playing baccarat at online casinos both for free and real money. Anyway, baccarat history does not end here: it continues to develop together with the game itself.