One of the Best: Labouchere Betting System for Baccarat 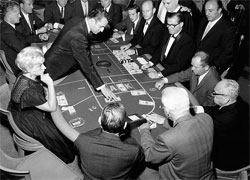 First of all you write down the row of numbers (their values and quantity will depend on the game you've chosen to play). Let's say that your row will be the following:

It is not a rule that all numbers should stay in a row according to their value. For example, the row 1 1 2 5 3 is also fine.

If you win this bet, you should cross out the first and last numbers of your row (1 and 7 in our example) and your next bet will be the sum of next two (first and last ones) numbers of the row:

If you lose your first bet, then you add the number of its units to the end of the row and make your next bet in a following way:

Labouchere betting system can be also used as positive progression system, like Parlay or Paroli system for example. The principle here stays the same but you add number to a row if you win and cross out the first and the last numbers of the row when you lose.

Your numbers row is the following:

1 1 3 5 7 8 (you add the number of units that won to your row). But if your bet of $16 loses then you cross out the first and the last numbers from your row and your next scheme to use will be that one:

Labouchere betting system works in such a way that your row of numbers will have only winning bets at the end and, as a result, you'll be a winner!